From their iconic bright pink feathers to their strange one-legged posture, flamingos are remarkable birds that are immediately recognizable at a distance. From zoo exhibits to plastic lawn decorations, this colorful waterfowl is one of the world’s most beloved animals.

Believe it or not, however, flamingos aren’t born pink. Their distinctive color comes from their diet, which includes algae and invertebrates high in red pigment. The birds’ strangely shaped beaks are the perfect tool for filter feeding. They like to kick up mud and silt from the bottoms of waterways, and use their beaks to quickly and efficiently consume their desired foods from the beds of the rivers and lakes where they spend most of their time.

What about the flamingo’s odd standing posture? Since all flamingos spend their rest periods balancing on one leg, it must serve some purpose. However, researchers have not yet settled on the exact reason why flamingos so frequently just stand on one leg. The same behavior is common in many other water birds like ducks, geese, and swans as well. We just notice flamingos standing on one leg more because their legs are so long.

One popular theory is the muscle fatigue explanation. According to some researchers, flamingos conserve energy while standing on one leg because then they can lock the joints and disengage their actual muscles. This is an important feature, especially in environments where sitting in shallow water is the only alternative.

Another possible explanation for flamingos standing on one leg is heat regulation. Even though these gorgeous birds mostly live in tropical regions, standing in water all day can still lead to significant heat loss. By reducing the number of feet in the water, flamingos may be able to maintain a healthy body temperature.

1. How do flamingos get their bright pink feathers?
(A) They are born that way.
(B) They get it from the vitamins in the water.
(C) They turn pink due to the tropical sun.
(D) They eat food with a lot of red pigment.

2. Which of the following statements is true about flamingos?
(A) They have no way to relax their leg muscles.
(B) They become less pink when they lose body heat.
(C) They mainly live in areas with a warm and wet climate.
(D) They are often mistaken for other water birds like geese.

3. Which of the following theories is NOT mentioned as a reason flamingos stand on one leg?
(A) To save energy.
(B) To prevent heat loss.
(C) To avoid muscle fatigue.
(D) To help them hunt for food.

4. Tony has to finish his science report on flamingos and swans. Which of the following choices can he write down in the BLUE block? 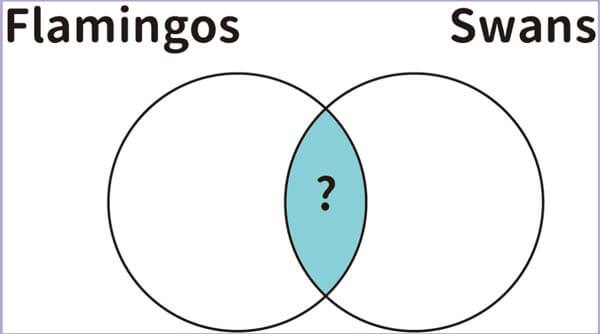